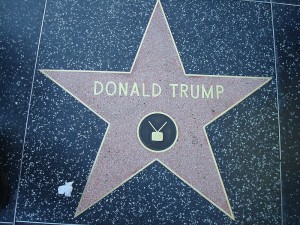 Here’s a shocking fact. Donald Trump really could emerge as the Republican Party’s flag-bearer in 2016. Or it could be somebody just as far outside the mainstream GOP establishment, a candidate with even less chance than The Donald of actually winning the White House.

If the GOP finds itself led by a reality TV star and former World Wrestling Federation personality, it is almost certain that Democrats will hold the presidency, meaning that Republicans will be sidelined from the Oval Office for the longest stretch since Harry Truman handed over the keys to Dwight Eisenhower.

A generation of American voters will come of age with no experience of a Republican president.

So the stakes for Republicans couldn’t be higher. And here’s the thing. If the conservative fringe does seize the GOP narrative next year, it won’t be the fault of tea partiers or Confederate flag-wavers who think undocumented Mexican workers are rapists, or Libertarians who want a return to the gold standard.

The real fault will lie with Republican moderates and establishment leaders who have allowed themselves to be divided and conquered. Here’s why.

In a divided field, anything can happen

In modern American politics, there are three big factors. The first is ideological. Where do various factions stand on the big issues of the day? And which politicians are able to harness those concerns in a way that will get voters fired up? In theory, you want a presidential candidate who can bring together at least two or three of the different tribes of the Republican base.

The second crucial element is money. Who can raise the kind of money needed to compete nationally, or at least regionally, through an election season that now stretches out over the better part of two years? If you can’t pull in lots of little donations, or gather the support of a few big sugar-daddies, you just can’t play the game.

The final factor – the one often overlooked – is structural. How does the structure of a political contest, its rules and the collective dynamic of the candidates, frame the outcome? This ranges from the weird tilt in the Electoral College to the often byzantine rules adopted by the parties for their primaries.

For the first time in decades, all of these factors are aligning in ways that are deeply perilous to the GOP’s establishment. Because conservatives are so divided ideologically and because there are so many candidates with billionaire backers, we could see a crowded and fiercely polarized contest right up to primary day.

That means a guy like Trump could emerge as victor, even though he wins only one narrow niche of the conservative movement. Remember, in 2016 Trump (or Mike Huckabee or Ben Carson) might only need a modest plurality of the vote to seize the nomination, possibly as low as 25% of the total.

With GOP moderates divided, could they be conquered by a Trump?

How does that differ from 2012, when we also saw a parade of candidates?

The huge distinction making this campaign more perilous for Republican moderates is that in addition to the mob of far-right, ultra-conservative candidates, there is also a strong gaggle of “mainstream” politicians splintering the GOP’s Main Street voting block.

Rather than backing one horse, like Romney (or John McCain in 2008), the establishment is fiercely divided.

So while Trump and Co. slug it out for the populist, say-anything-and-say-it-loud pool, you also have The Big Five — Jeb Bush, Scott Walker, Mark Kasich, Chris Christie, and Marco Rubio — divvying up the common-sense chamber-of-commerce faction.

Consider this. Three years ago, Mitt Romney won enough votes that he easily beat his next three competitors — Rick Santorum, Newt Gingrich, and Ron Paul — combined. In the final equation, moderates unified and for all the fulminating and blustering of AM talk show hosts, the fringe of the party barely registered.

But in 2016, there is no legitimate establishment candidate who can say, “it’s my turn.” With their wing of the party divided, we could easily see The Donald (or another marginal candidate) edge out serious players like Bush and Walker.

Indeed, that’s happening right now. Trump is hardly wowing conservatives, garnering only about a quarter of the total vote. Meanwhile, Bush, Walker, Rubio, Christie and Kasich are (all together) winning roughly 40% of the vote. But taken separately, they’re struggling to climb into the low double digits.

So that’s the question as we head into fall. It’s not whether Trump or the other reality-show-talk-radio candidates flame out. It’s whether one mainstream candidate can emerge with a narrative strong enough and compelling enough to force the other grown-ups to drop out.

Right now, it’s hard to see that happening. At least three of the Big Five have the money and the backing to last deep into next year, keeping the establishment divided and leaving a big opening for someone on the fringe.

Unless something changes, look for 2016 to be a long, long year for Republicans trying to build a ticket that can win back the White House.

41 Comments on “On debate day, Republican moderates are beating themselves”