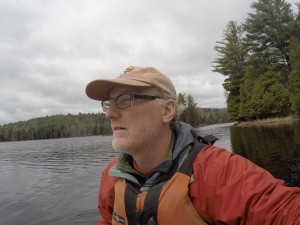 At NCPR we search out the good stories as well as the grim ones. Brian Mann paddling the Boquet River.

Last week, NCPR’s airwaves were filled with bleak dispatches from our troubled world, with another mass shooting in Oregon, continued violence in Syria, and America’s political culture twisting itself into tighter and tighter knots.

But as we gear up for our fall membership drive, I want to celebrate a part of what NCPR does every single morning that a lot of news organizations fumble:  We tell the good stories.

I count myself as a fairly hard-nosed newsman.  I’ve had a front-row seat for some big disasters and tragedies over the last thirty years, from the Exxon Valdez Oil Spill to 9/11 to the Lac Megantic oil train conflagration.  But I’ve also come to appreciate how painfully skewed journalism’s filter has become.In an era when the world is making huge strides toward more dignity and more peace and more prosperity for far more humans, we reporters tend to focus on the stuff that’s blowing up.  Which is, on the one hand, fair enough.  There’s a reason we need to talk a lot about Syrian refugees or global warming or Ebola.But on the other hand, we give our audiences a dangerously skewed picture of the human condition when we fail to point out that Africa is more prosperous, peaceful and healthy now than at any previous time in recorded history.  The population on the continent is surging because so many fewer people, particularly children, are dying of poverty and disease.Here in the North Country, we run similar risks on a much smaller scale.  Our region can be a hardscrabble, hand-to-mouth place.  And yes, we spend a lot of time talking about poverty and unemployment and prisons.
But our corner of the world is also among the most beautiful, most neighborly, most creative and most generous communities you’ll find.  There are a lot of cool, hopeful, exciting things going on.So when Todd Moe talks to an artist in Old Forge or Martha Foley talks with Amy Ivy about the glorious adventure gardening in a cold climate or when I take you along on a hike into the mountains or Zach Hirsch profiles the music scene in Plattsburgh or David Sommerstein introduces us to an ambitious family of young farmers…that’s not fluff.  Those positive stories are not just the sugar that makes the vinegar go down.They are on any given day at least half of the reality of our world.  And most days, that cool stuff and those cool people you hear about on NCPR, they represent far more than half the reality.  In fact, that’s most of the reality.  That’s how we get through the hard winters and hard times.  By making good things happen.This isn’t to say that we won’t keep covering the painful, ugly stuff.  Of course we will.  But one of the things I love about our work at NCPR is that we are empowered and inspired to give a balanced, living picture of the community we serve.  And sometimes the most important, life-changing developments are the ones that go right, not the ones that go wrong.

You’ll hear a lot of arguments during our drive about why you should give a little bit of your hard-earned money to support this public radio station.  I’m convinced that this is as sound a reason as any.  After all, in these days when ambulance chasers, sensation-mongers and doom-peddlers are a dime a dozen, it’s a good news story in its own right that NCPR is different.

14 Comments on “In defense of good news”