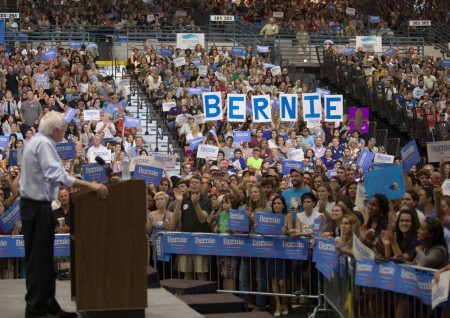 This week, Bernie Sanders finally achieved what many of his supporters believed all along: He became a serious contender for the Democratic presidential nomination. By pulling out a narrow win in the large Midwestern industrial state of Michigan, Sanders proved that a significant chunk of America’s center-left voting population wants a different Democratic Party.

That’s huge. The party of Sanders would be more liberal, more apt to occupy Wall Street than take its donations, more aggressive in its attack on income and wealth disparity and more unrelenting in fighting to reform the nation’s campaign finance system. Tuesday’s primary vote was a direct challenge to the Bill Clinton-era realignment of the Democratic Party, which established the organization as decidedly moderate and incrementalist.

That sounds like an easy sell to Bernie fans, many of whom think NAFTA was a deal with the devil and economic growth is secondary to economic fairness. A lot of his followers share Sanders’ conviction that Barack Obama was too timid, too willing to cozy up to bankers and traders. They’re baffled that this primary is even a contest.

But the jury is still out. Barack Obama and Bill Clinton remain hugely popular among rank-and-file voters and a lot of “Main Street” Democrats remain uncomfortable with Sanders’ talk of European-style socialism and revolution. It’s safe to say that the Vermont Senator’s campaign has already re-energized the liberal wing of the Democratic Party. But unless he wins this fight, the shift to the left will almost certainly be modest, far short of the full-scale realignment he’s calling for.

So here’s the question as we push into mid-March: Can Sanders capitalize on this moment by finding a way to shift the narrative fundamentally? That’s necessary because, as of right now, he’s still on the losing side of the delegate race by a significant and stubborn margin. In fact, Sanders fell even further behind this week, thanks to Clinton’s close second-place finish in Michigan combined with her whopper of a victory in Mississippi.

He picked up bragging rights. She gained 21 more delegates.

It’s important to point out, as an aside, that Sanders is losing not because of dirty tricks or Democratic Party shenanigans or wily superdelegates. My in-box and my Facebook wall are full of these claims. They are, so far as I can tell from a lot of good reporting, complete nonsense. The painful irony for Bernie’s team is that he’s losing in exactly the same way that Hillary Clinton lost eight years ago. The rules of the Democratic primary make it hard to make up lost ground, and he lost a lot of ground early on.

Here’s the reality. The proportional system used by Democrats to allocate delegates means that Sanders needs some big wins in some big states. Big wins in little states won’t cut it; neither will narrow victories in big states, like the one he just achieved in Michigan. He needs a blow-out and it needs to come in a place like California, New York or Ohio. And that’s a tall order. Right now, it’s still easy to find states where it seems likely that Clinton will pick up a big net gain of of delegates. It’s much harder to find states where Sanders will do so.

Which brings me back to my main point:  This is Bernie’s moment, but he needs to translate it into an even bigger, fundamentally narrative-changing moment. He needs to find a way that the next big primary vote on March 15th doesn’t turn into another day of pyhrric victories, where he captures some meaningful and symbolic wins, but still falls a bit further behind.

In short, he needs to make it clear to a lot of Democrats very quickly that he is the new face, the new leader of a rapidly changing party and that Clinton’s brand of steady-as-she goes is yesterday’s news.

This is the test we’ll see playing out in Florida, Illinois, Missouri, North Carolina and Ohio next week. Has the momentum shifted in this race in a way that will carry Sanders to a victory? Are Democrats really ready, eager, impatient for their party to step significantly to the left? Or will Sanders and his followers find themselves stuck in the same role that Clinton and her camp played in 2008, when she ran an agonizingly close second-place campaign but was forced in the end to step aside and cheer for Barack Obama?

In many ways, the stakes are much higher for Sanders and his supporters. When Clinton lost in 2008, she was in her early sixties. It seemed plausible, perhaps inevitable, that she would run again and have a second shot at the White House.  Her bid was also less transformational, less of a fight for fundamental change.  It’s reasonable to assume that Clinton would have governed the country more or less in the same way that Obama tried to do.

As Sanders fights for the nomination, however, he is, by his own account, reaching for a revolution. He is also 74 years old. If he fails, the Democratic Party will certainly feel his influence for years to come. But this is his one bid to redefine liberalism and realign the nation’s politics. We’ll learn very soon — perhaps as early as next week — whether he pulled off that historic feat or came shockingly, tantalizingly close.