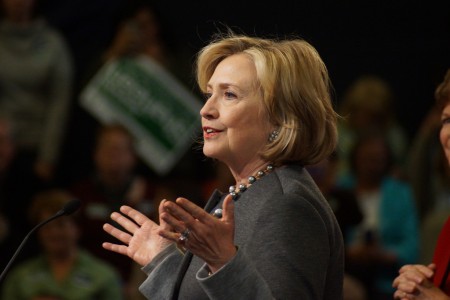 This week’s primary results couldn’t have been scripted more perfectly for former first lady, former New York Senator and former Secretary of State Hillary Rodham Clinton. After drawing fire for arranging a coronation in the Democratic primary, Clinton instead faced a ferocious challenge from Vermont Senator Bernie Sanders. Through the winter, Sanders punched hard and rallied hundreds of thousands of supporters, winning important, if narrow, victories in states like Michigan and New Hampshire.

But this week, Clinton proved she could take multiple hits and keep marching forward. She also proved that she has steadily built the kind of center-left coalition that wins Democratic primaries and also bodes well in general elections. She looked particularly strong in the three states — Florida, North Carolina and Ohio — that could give her the ultimate prize in November.

Sanders needed a huge win and got walloped

Short of running an independent, third-party challenge (which I think is increasingly possible, more on this in a later post) Sanders is now effectively a “message” candidate. He may well influence the Democratic Party’s ideological trajectory in significant ways. But barring a massive, history-altering event, he won’t be the Democratic nominee.

The reason Sanders is fading is pretty simple: He keeps losing crucial primary elections. Yes, he scored a shocking upset in Michigan. But after Tuesday’s drubbing, he has now lost two-thirds of the state contests so far, often by landslide margins. Even when he wins, he tends to do so narrowly, by a few points. All of which puts him so far behind in the delegate count that catching up would require an awesome surge.

With an assist from Mr. Trump

The biggest prize for Clinton, however, wasn’t putting Sanders in her rear view mirror. Most handicappers thought she was already pretty safe. The big win came when Donald Trump effectively seized the Republican nomination.

Trump is a figure so polarizing, so controversial, that some of the most influential leaders of the conservative movement have now declared bluntly that they won’t support him. There are serious talks underway of launching a “third party” Republican to run in November. If that happens, Clinton would almost certainly win the White House in a landslide.

But even if the GOP civil war doesn’t erupt into a full-scale bloodbath, it’s difficult to see how the party can organize the sophisticated, pitch-perfect coordinated effort that would be needed to stop Clinton. Republican women, in particular, could well defect from Trump in significant numbers.

Trump is also the kind of candidate who will help solidify the Democratic base. Even the most fervent Bernie fans may find it difficult to sit out this presidential election if the alternative to Clinton is Trump.

An election fought on Clinton’s turf

Remember, Democrats already enjoyed a huge systemic advantage in 2016. The states they’ve won in almost every presidential election since 1992 give them a comfortable grip on 257 electoral college votes — just 13 short of victory. Win Florida and it’s over. Win North Carolina and Ohio, boom.

Meanwhile, their demographic advantages have continued to grow, thanks in large part to the growth of the Latino vote in battleground states. Florida’s population of Puerto Ricans alone has surged by roughly 500,000 people since 2000. And all of those “immigrants” are U.S. citizens, which means they can vote.

So Republicans needed to get this really, really right. Instead, they’ve blown it big time, falling into the kind of factional intra-party fighting that we haven’t seen in American politics since at least the Democratic convention in 1968.

Yes, a Clinton win would be historic

There are three reasons that the emerging outlines of this race are historic.

The first, obviously, is that the United States is now within range of electing its first woman to serve in the Oval Office. Clinton’s “inevitability” and her complicated personal history have caused a lot of people to look past this milestone, but it’s a big deal. A century after American women won the right to vote, another barrier will have fallen.

The second reason this is historic is that we really are seeing the end of a long, gloried era in American politics. The Republican Party ended slavery. It’s the party of Lincoln, Eisenhower, and Reagan. For decades, the GOP was the chief steward of important American values, arguing for limited government, budget discipline, and an adult, moderate stability. Even before November’s vote, that brand is now deeply tarnished.

This isn’t only a cosmetic problem. If Clinton does prevail, Democrats will have won the popular vote in every presidential election, save one, from 1992 through 2016. Think about that for a moment. If Clinton serves two terms, then Republicans will have lost our only fully national election again and again over a 28-year period.

There will be a huge block of voters who have no memory at all of a Republican president. For many more, the only living memory of GOP governance will be George W. Bush.

So far, thanks in significant measure to gerrymandering of House districts and low-turnout for Democrats in off-year elections, the GOP has maintained its influence in Congress and at the state and local level. But the White House is the big prize. It’s the gateway to the Supreme Court. It’s the bully pulpit. It’s the high ground.

With America’s massive demographic shift continuing to erode the influence of white voters, it’s hard to see how Republicans get back there without rethinking their relationship with our increasingly diverse population.

There is one final reason that this election will be historic if Clinton wins. The vote would serve as a final validation of Barack Obama, our first African-American president. For seven years, conservatives have fought hammer and tong not only to defeat and roll back Obama’s policies, but to invalidate him as an American and as a president.

In 2010, Senate Republican leader Mitch McConnell laid down a clear marker. “The single most important thing we want to achieve is for President Obama to be a one-term president,” he insisted.

But Obama won his own second term four years ago and Clinton is now running strong on the argument that she will effectively continue Obama’s policies into a third term. If voters pick Clinton, they will have repudiated one of the central motivating arguments of the modern conservative movement.

42 Comments on “Will Hillary Rodham Clinton make history as our next president? Almost certainly. Here’s why”