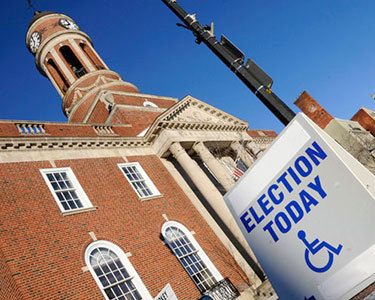 Former New York Senator Hillary Rodham Clinton appears to have won a decisive victory in the Democratic primary, while New York City billionaire Donald Trump shoved aside rivals Ted Cruz and John Kasich in the race for the Republican nomination.

Results are still unofficial and a confused day of voting brought complaints of irregularities and confusion at polling places across New York.  But the results tallied so far suggest that the two front-runners were able to bolster their positions.

Sanders was bolstered by a strong showing in many North Country counties and appears to have won much of Upstate New York.  But returns counted in the first hour after polls closed indicate that his losses in New York City and the lower Hudson Valley overwhelmed Sanders’ edge in northern and western counties.

Results aside, it was a historic day for New York voters, a rare primary dominated by politicians with deep ties to the Empire State, and a primary where voters here still had a chance to play a key role in choosing the two major parties’ candidates.

NCPR will have full coverage tomorrow morning during Morning Edition from NPR and during our own regional broadcasts at 6:50 am and again during the 8 O’clock Hour.  As always your comments and thoughts are welcome.

Associated Press and other news outlets call the race in favor of the former New York Senator and Secretary of State.  Holding her home state despite a powerful Sanders insurgency represents a major victory for Clinton.  Developing…

Information is starting to trickle in from counties across Upstate New York and the North Country.  There appears to be a stark Upstate-Downstate divide on the Democratic side.  Hillary Clinton is walloping Bernie Sanders in the early returns in the lower Hudson Valley and the five boroughs.  But Sanders is turning the map a shade of Vermont mountain green in places like Fulton, Jefferson and Lewis counties.  These numbers are early and unofficial, but right now Sanders is winning a whopping 61% in Fulton County.  Sanders is winning 55% in St. Lawrence County.  Developing…

A lot of discussion of “irregularities” and the need for post-primary day reforms.  I spoke to a bunch of voters today in Plattsburgh.  Some had an easy time of voting, while others really struggled or found themselves boxed out of the system.  The Glens Falls Post Star editorial board weighed in on this question this week.  Here’s one issue they raised you may not have thought of:

New York might want to consider condensing its primary season into one election just to save money. This year, the presidential primary is on April 19, the congressional primary is on June 28 and state and local primaries are on Sept. 13.

That’s ridiculous and meant to confuse voters. It makes sense to get it all done on one day.

Exit data I’m seeing on various sites indicate really dramatic disparities continue to mark this Democratic primary.  Huge advantages for Clinton with older voters and people of color, blacks and Hispanics in particular.  Ginormous advantages for Sanders with younger and white voters.  How to stitch that back together?  That’s a big question for the nominee once voters sort this primary out.  Right now counted ballots continue to show Clinton holding a big lead, but only about 6% of votes counted.

Exit polls showing Clinton with roughly a 4-point lead over Sanders.  Early returns showing a much stronger showing for Clinton, but a ton of votes still to be counted.  Nate Silver at 538.com is saying that it’s too close to call at this point.

CNN has declared Donald Trump the winner of New York’s Republican primary.  The New York City billionaire has looked to his home state to revitalize a campaign injured in recent weeks by missteps and dogged by Sen. Ted Cruz (R-Tx), who has won a number of victories.

Questions remain about the size and scale of Trump’s victory.  The final numbers could tell a lot about his ability to secure the Republican nomination without a floor fight at the convention in Cleveland.

We’re starting to see some muddled exit polling information, but the bottom line is that polls close in 30 minutes.  Then we’ll know how this day is going to pan out.

A big Hillary Clinton win could mean the race being called quickly, soon after 9 pm.  If Bernie Sanders has made it close, we could have a long night.

Donald Trump, meanwhile, needs a big night and that looks likely.  I expect the Associated Press and the networks to call it for the Manhattan billionaire almost immediately.

This is what a primary is supposed to look like in New York state.  One of my biggest beefs with America’s election calendar is that most of the big decisions get made early, in places like Iowa and New Hampshire.  Sometimes the fight extends into Nevada or South Carolina.

This year, thanks to the chaos on the Republican side and the spirited insurgent campaign of Bernie Sanders, there are still huge questions on the table.  Will Donald Trump seal the GOP nomination or will there be a contested convention?  Will Hillary Clinton emerge as a powerful Democratic nominee with a significant mandate, or will she be forced to slog through April, May and June in search of a victory?

And can Bernie Sanders actually carve out a realistic path to the Democratic nomination, given his deficit in the popular vote and the pledged count?  Remember, it’s late in the game for symbolic victories.  The Vermont senator needs a Michigan-style upset.

This year, New York state gets to have a say in all that.  It’s been riveting to see American politicians actually campaigning in black churches in Brooklyn and stumping for votes on the margin of Fort Drum in Watertown.

With just over two hours to go before the polls close, it’s a gripping day for democracy in the Empire state.  Hopefully, this taste of relevance will motivate political activists here to demand a bigger role going forward.

If you haven’t voted yet, go forth and cast that ballot…

We’re seeing busy polling places today across the North Country.  I’ve been outside the government building in downtown Plattsburgh, where turnout looks heavy.  I’ve interviewed Hillary Clinton and Donald Trump supporters, but the buzz here has definitely been for Bernie Sanders.

Voting problems?  I’ve heard a mixed bag.  Some people who tried to change parties to vote today did so too late or tell me they misunderstood the rules.  Others, including one young first-time Bernie voter, said they had no problems.  “I registered on-line and it took me five minutes,” said Hector Carrasco, age 20, from Plattsburgh.

New York’s restrictive voting laws are getting a lot of attention.  Check out this treatment from the website Fivethirtyeight.com.

Polls opening now in the North Country and the rest of New York.  (Open since 6 am in NYC.)

A couple of thoughts about the meta-narrative.  This is really a contest between Hillary Clinton’s history in New York and Bernie Sanders’ momentum and passion.

The polls suggest that Clinton’s years living in New York and representing the state in the US Senate have given her enough of an edge to prevail.  The Real Clear Politics average gives her about a 12-point lead. In any other race, that would be “game over.”

But the Sanders campaign is different.  My social media feeds are full of pull-out-all-the-stops-get-out-the-vote messaging.  His supporters view this as a defining moment for the country and the Democratic party.  Could a wave of turnout up-end the results?

The main hurdle for the Sanders camp could be New York’s closed primary laws, which made it hard for people to register as Democrats in time for today’s vote.  My guess is that a lot of the people at those Bernie rallies aren’t actually able to cast ballots today.  But we’ll see.

Chime in with your thoughts.  What are you hearing in your corner of the North Country?  Any sign in your county that Donald Trump isn’t the runaway favorite on the Republican side?  Comments welcome.

It’s on!  Voters in much of New York state are already at the polls this morning.  Here in the North Country, voting begins at noon and runs to 9 pm.*  This is a biggy.  Will Bernie Sanders beat expectations and live to fight another day?  Will Hillary Clinton seal the deal on a nomination she’s been fighting for since 2007?

What about the Republican side?  Is this the day Donald Trump regains his mojo?  Will Ted Kruz or John Kasich score some delegates in some congressional districts?

We’ll be blogging this contest through the day, with more frequent updates later this evening.  Jump in with your thoughts about this historic, passionate primary.  And remember to keep it civil.  This is democracy, not MMA.

*There’s been a ton of anxiety about voting access in this year’s primary.  It’s perfectly normal for North Country polling places to open at noon.