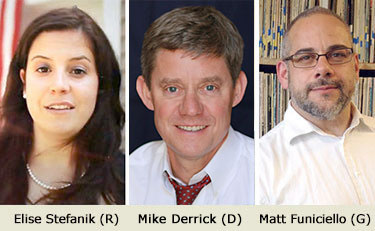 Candidates for the NY-21 congressional race.

So it’s closing argument time, at least for New York’s Democratic primary. Hillary Clinton needs a big win here to seal the deal on her nomination. Bernie Sanders needs a win as he tries to chart a viable path to an upset.

Meanwhile, Donald Trump desperately needs a victory Tuesday after a couple of bruising weeks on the campaign trail. He’ll be in Plattsburgh and Watertown wooing voters Friday and Saturday.

A subtext to the Battle for the Empire State is the fact that this is a closed primary. Roughly 1-in-3 registered North Country voters aren’t eligible to cast ballots on Tuesday.

So what do you think? Here’s an open thread for political junkies to sound off through the weekend. Remember to keep it civil.

Bernie and Hillary are campaigning in New York ahead of the April 19th primary. Sanders was in the Bronx yesterday and Clinton made a whistle stop at the Apollo Theater in Harlem. The latest polls show the Vermont Senator closing the gap, but still trailing by 12 points. Meanwhile, Clinton is rallying old allies to stump for her, including former St. Lawrence County administrator Karen St. Hilaire.

What do you think?  Are you feeling the Bern? Do you share Clinton’s sense that Sanders is taking cheap shots at the Democratic frontrunner?

NY21:  A major fight or a political dud?

We’ll be profiling the three candidates in the weeks ahead. We’ve already dug into Democrat Mike Derrick’s record and career. Click here and here to check out those stories.

So what do you think? I call this a “big” race, but is the House race likely to be truly competitive? In a three-way race in 2014, Republican Elise Stefanik won 53 percent of the vote, topping her closest challenger by nearly 40,000 votes.

Stefanik says she’ll support the Republican presidential candidate, no matter who that is — even Donald Trump, even Ted Cruz. Rep. Richard Hanna, the Republican who represents a small part of the North Country, has gone a different route, saying he won’t support those candidates. “This party used to be the party of common sense conservatism and it’s become ideologically strangled, a victim of its own extremes,” Hanna told WRVO.  “The closet bigotry, and not so closeted bigotry, all of it I’m deeply offended by.”

Hanna isn’t seeking re-election, but his position could put pressure on Stefanik. What do you think? Will the Trump factor matter in NY21?

In 2014, Matt Funiciello fought his way into double-digits, scoring nearly 11 percent of the total vote. He’s back for another round. What’s your take on his candidacy? A classic spoiler making it impossible for the Democrat to compete? A valiant, principled run by a North Country maverick?

Is there a way for Derrick to woo Funiciello voters? What do you think of Derrick’s argument that a vote for Funiciello is a “wasted” vote?

Is Derrick’s military service an X-factor?

Mike Derrick has the kind of service record that looks great on any political resume. He fought in four land battles during Desert Storm. He’s a West Point grad who has worked for the State Department. In a district that includes Fort Drum, could that real-world military- and foreign-policy expertise give him an edge?

Stefanik has made military and foreign policy issues a cornerstone of her political agenda, serving on the House Armed Services Committee. She championed the end of the ‘sequester’ budget cuts for the military and has visited troops overseas. She also worked for a conservative foreign policy think-tank before running for Congress.
So how does the military-defense issue play? Is it a wash?

Those are my questions as we wade into the campaign season. Feel free to chime in with any thoughts or ideas or questions of your own, but remember to keep it civil. All these politicians and candidates are in the business of public service. They deserve scrutiny and tough questions, but also civility and respect. With that, consider this thread officially open.

49 Comments on “Politics Open Thread: Your take on Bernie and Hillary and Donald? Stefanik, Funiciello and Derrick?”