Subscribe
iTunesSpotifyGoogle PlayRSS
by Brian Mann on May 28th, 2016

As the 2016 presidential race slouches toward November, we’ve reached the moment when the presumptive Democratic Party nominee faces her biggest test so far. It’s not the California ballot. It’s not the lingering insurgency of Sen. Bernie Sanders. It’s not Donald Trump’s smears about the death of Vince Foster. 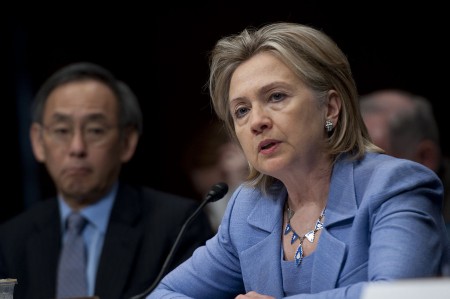 Secretary of State Hillary Rodham Clinton at a Senate hearing in 2010. Clinton has been under scrutiny since 2014 for her use of a private email server while serving as secretary of state. Nothing she has said to date about the matter has put the controversy to rest. Photo: Department of Defense

It is, rather, her clearly improper use of a private email server system while holding the office of Secretary of State of the United States, one of the most important roles in the US government. That decision, which she has since called a “mistake,” has raised important questions about Clinton’s character and her judgment.

All of which should sound pretty familiar.

In March of 2008, the dramatic rise of Barack Obama hit a devastating road block in the revelation that he had sat with apparent complacency through years of sermons in the church of the Rev. Jeremiah Wright, a man who famously described the 9/11 terror attacks as “the chickens coming home to roost.”

It was troubling stuff. Year after year, Sunday after Sunday, then-Sen. Obama attended the church of a man with unambiguously radical views about America, its history, and our racial divide. To cite one example, Wright believed that America’s government knew about the Pearl Harbor attacks and deliberately failed to prevent them.

“No, no, no, not God Bless America,” Wright sermonized. “God damn America — that’s in the Bible — for killing innocent people. God damn America, for treating our citizens as less than human. God damn America, as long as she tries to act like she is God, and she is supreme. The United States government has failed the vast majority of her citizens of African descent.”

It was never clear how many of those bitterly controversial sermons Obama heard. But Clinton herself was quick to suggest that his loyalty to Wright’s church raised serious questions about Obama’s character and judgment.

“You don’t choose your family, but you choose what church you want to attend,” Clinton said. “I think given all we have heard and seen, [Wright] would not have been my pastor.”

Obama, famously, managed to pivot by giving one of the great speeches of his career. Speaking in Philadelphia, the future president acknowledged Wright’s “incendiary language,” but he placed the preacher’s sermons in the context of a much larger, more complicated history.

“I have already condemned, in unequivocal terms, the statements of Reverend Wright that have caused such controversy,” Obama said. “For some, nagging questions remain. Did I know him to be an occasionally fierce critic of American domestic and foreign policy? Of course. Did I ever hear him make remarks that could be considered controversial while I sat in church? Yes. Did I strongly disagree with many of his political views? Absolutely—just as I’m sure many of you have heard remarks from your pastors, priests, or rabbis with which you strongly disagreed.”

Not everyone bought it, of course. Those “nagging doubts” never quite settled. Conservatives have continued to argue that Obama was permanently tarnished by his association with Wright, whose positions were, as Obama himself conceded, “profoundly distorted.”

But a lot of Americans felt that Obama had spoken personally and frankly about the scandal. That speech likely saved his candidacy.

It’s that kind of speech that Hillary Clinton needs to give now. She needs to explain her actions using a private email server both broadly and with specificity. She needs to tell the American people why she used such tactics and she needs to lay aside semantics and sophistry in defending them.

Arguably, her lapse in judgment is the more significant. It occurred during a time when she was serving in public office and it was a decision that treated directly on her duties at the State Department. Which means that her explanation needs to be even more frank and vulnerable.

For all of Clinton’s political strengths, it remains unclear whether she is capable of an Obama-like moment of nimbleness and clarity. As the New York Times noted this week in a scathing editorial, “The reflex she is revealing again now — to hunker down when challenged — is likely to make her seem less personable to many voters, and it will surely inflame critics’ charges of an underlying arrogance.”

Assuming the FBI doesn’t produce indictments, it is still possible for Clinton to lay this to rest, as Obama laid the Wright scandal to rest. She should explain herself directly to the American people. Then she should take questions from reporters, giving answers that are candid and honest and thorough.

Clinton showed at the Benghazi hearings that she was capable of toughness. Now, perhaps for the first time in her long political career, it is essential that she show her honesty and transparency.

25 Comments on “Yes, this is Hillary Clinton’s Reverend Wright moment”