Brian Mann talked with Martha Foley about Stefanik’s support for Trump on The Eight O’clock Hour, 8/30/16 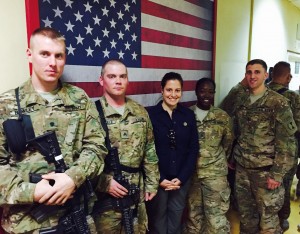 Rep. Elise Stefanik, shown here visiting US soldiers in Afghanistan, is a respected expert on foreign affairs and military policy. She sits on the House Armed services committee and represents the Fort Drum Army base, which sits within her 21st NY district. NCPR has urged her to answer more substantive questions about her support for Donald Trump to serve as America’s next commander in chief. Photo: provided

On the campaign trail this summer, Rep. Elise Stefanik has answered a smattering of questions on the fly about her support for Republican presidential candidate Donald Trump. These exchanges have been brief, and lacking in specificity. They usually come during what we in the news business call a “scrum.” That’s the hasty exchange between a politician and reporters that happens after a campaign event.

In those exchanges, the congresswoman has suggested that the topic of her support for Mr. Trump is a distraction from her own re-election campaign. “Look, I’m focused on my race,” she said earlier this month during a stop in Watertown. (Hear her full comments here.)

We disagree. We have repeatedly asked Rep. Stefanik for a focused, sit-down interview to talk in detail about why she thinks Mr. Trump would be a capable commander in chief. We’ve offered to provide our questions in advance. We’ve offered to conduct the interview at a time and place that matches her schedule.

She has refused. Here’s why we hope she’ll reconsider.

If elected, Mr. Trump would hold awesome power over the health, the safety, the legal standing, and the honor of thousands of North Country service-members living here in New York’s 21st House district.

These include soldiers with the 10th Mountain Division stationed at Fort Drum near Watertown or serving overseas, as well as National Guard reservists in many of our small towns. For those men and women, and their families, this is as local and personal as any issue can be.

If he’s elected, Mr. Trump’s policies and ideas will shape every aspect of their lives.

Rep. Stefanik is widely recognized as an expert on military and foreign policy issues within the Republican Party. She serves on the House Armed Services Committee. In that role, and in her capacity as Fort Drum’s most important voice in Washington, here are the questions we feel she needs to answer.

As we urge Rep. Stefanik to sit down with us and address these questions, it’s important to say again that this isn’t ‘gotcha’ stuff. These are issues of life and death and national security. These are questions central to Rep. Stefanik’s work representing the military families who live right here.

It’s worth pointing out that NCPR isn’t the only news organization urging our congresswoman to explain more fully her support for the Republican presidential nominee. In recent weeks, journalists and editors with the Watertown Daily Times, the Glens Falls Post Star, the Sun Community News chain of newspapers, and Time Warner Cable News in Watertown have all demanded a far more substantive explanation of the congresswoman’s decision to back Mr. Trump.

There’s a reason we’re pushing for answers. We live in a dangerous world. The North Country has suffered grievous losses since 9/11, with local troops serving and dying on the front lines in the war on terror and the wars in Afghanistan and Iraq. Our neighbors have paid a heavy price. They will almost certainly be asked to make more sacrifices in the years ahead.

Meanwhile, serious questions have been raised from within Rep. Stefanik’s own party and her own conservative movement about Mr. Trump’s character and fundamental readiness to serve as commander in chief. As Fort Drum’s voice, we need our congresswoman to speak fully and in detail about why she thinks the Republican nominee is the right man for the job.

In the interest of full disclosure, Brian Mann’s son Nicholas Mann, a college student at George Washington University, worked for part of the summer as an unpaid volunteer for the campaign of Democratic candidate Mike Derrick, one of Stefanik’s challengers in the 21st district House race.

37 Comments on “Here’s what we need to know about Rep. Elise Stefanik’s support for Donald Trump”