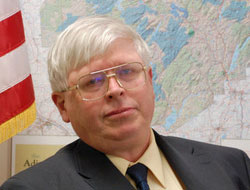 The deal will allow NYCO minerals to excavate wollastonite from roughly 200 acres of Park land.  In exchange, the company will purchase land to be added to the forest preserve worth at least $1 million.

Because it impacted publicly-owned Park land, the deal required a constitutional amendment to move forward.

Yesterday at the APA meeting in Ray Brook, commissioner Dick Booth — who teaches environmental law at Cornell University and is widely respected within the Park’s green community — embraced the deal.

“I think the NYCO thing made a huge amount of sense,” Booth said, during an open comment period.

“A number of people said it was a bad precedent.  My sense is that the constitutional process worked. When the question was narrowly drawn, it makes sense.  The forest preserve I think is going to clearly benefit from this.  I was glad that people voted to support it.”

Booth joins a number of other environmental leaders who publicly supported the deal, including Willie Janeway and John Sheehan at the Adirondack Council, Neil Woodworth at the Adirondack Mountain Club, as well as Peter Paine Jr, the former APA commissioner from Willsboro who helped create the modern Adirondack Park Agency.

Other environmental leaders, however, have decried the deal arguing it sets a dangerous precedent for the commercial exploitation of the Park’s “forever wild” forest preserve.

They also argue that the land deal was poorly vetted and will impact mature stands of trees and vernal pools.

Even after the vote, the dispute within the green community has lingered with both sides arguing their perspectives in sometimes combative web posts.