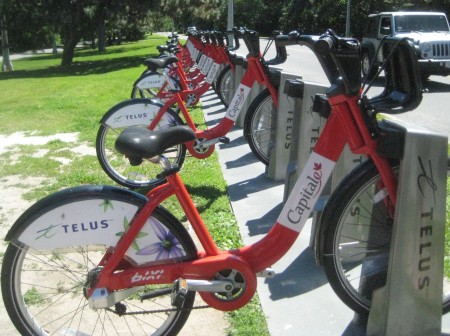 Readers may recall the Bixi bike share system in cities like Ottawa and New York City. Despite Bixi’s slew of financial and managerial problems, a recent press release suggests continued support for that form of rented transportation in Canada’s Capital region:

The National Capital Commission (NCC) is pleased to announce the transfer of its bike share program, Capital BIXI, to CycleHop, LLC, effective April 17, 2014. The new owner and operator will resume the bike share service in the core of Ottawa–Gatineau by this summer 2014, while making plans for system expansion.

CycleHop CEO Josh Squire positioned bike sharing as a plus for both residents and visitors, calling it “…a fun way to get around. It is good for your personal health, and for the health of our planet.” According to the NCC’s media release:

CycleHop is committed to doubling the size of the current program within the next few years, at its own expense. The current public bike share program serves the downtown core of Ottawa and Gatineau, with 250 bicycles at 25 locations. CycleHop also plans to work on increasing participation among individuals and corporate users, enhancing customer service, and renewing the public’s enthusiasm and support for the program.

The Ottawa Citizen says Bixi opened its very first bike share system in Montréal, with Ottawa being the second such effort, since June of 2009.

The Bixi rental season was due to begin in mid-April this year. On Thursday, the NCC said the new owner will resume the bike share service by this summer.

But Squire said it might happen sooner than that.

Earlier this week, the Montréal Gazette reported Bixi bikes are once more being rented in that city and that over 3,000 bikes should be in service by month’s end.

An article about the convoluted Bixi saga in the Atlantic, makes parts of the bankruptcy mess sound almost exciting, even exotic:

Who is Rodi, anyway? Well, have you ever seen those Dos Equis ads featuring “the most interesting man in the world”? This dude gives that one a run for his money, and in real life. The owner of the furniture company Rodi, “le spécialiste du sofa,” is also a world traveler who has undertaken an almost ridiculous number of adventures and was reportedly on a boat in the Indian Ocean while the Bixi sale was going down.

They just look like a rack of clunky bikes. Apparently there’s plenty going on behind the scenes.