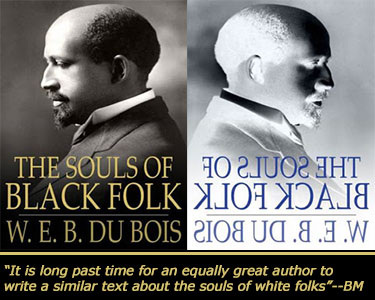 A little more than a hundred years ago, W.E.B. Du Bois wrote a book of essays that strove to examine “the strange meaning of being black here at the dawning of the Twentieth Century.” It strikes me, watching the violence and unrest in Ferguson, Missouri, that it is long past time for an equally great author to write a similar text about the souls of white folks.

I’m not that writer, but I think I can point to some of the questions that he or she might pose to the rest of us who live in an America where whites will soon become one minority among many, one racial tribe among a family of tribes.

First, I would ask how it is that so many of us who are white have been encouraged and trained to forget the agony and burden of our own history?

We are a nation that often describes itself as “Christian” and “European,” meaning that we are comfortable thinking of a man who lived 2,000 years ago as a present and inspirational figure in our moral lives. We talk about the long chain of ideas that stretch back through the Puritans of England, the Enlightenment philosophers of France and Italy, even as far back as the thinkers of ancient Rome and Greece.

Yet we rush eagerly to pretend that events that occurred on our own soil a century ago, or a decade ago, or last year are somehow old news–dead history. We stand proudly on the shoulders of giants when talking about our national greatness, yet we insist cravenly that the crimes of our forefathers have no bearing on present circumstances.

This kind of deliberate ignorance is not a sign of strength or courage, but a symptom of deep, abiding shame.

Racism grows from many seeds in America. But the most robust and the most poisonous, surely, is this kernel of sad and secret guilt, which we hide away behind euphemisms and sly bigotry and code words and unexamined privilege. This is the strange meaning of being white in 21st century America.

We know the facts–or at least anyone does who has not chosen to embrace the intoxicating bigotry of TV networks and websites that peddle deception and propaganda. We know that we have inherited the vast prosperity of a nation built on stolen labor and stolen soil, our foundations laid in the suffering and the evil malignancy of slavery and land-theft. Not just in the South, but across the United States, the seed corn of our present wealth was planted not with a fish to nurture its growth, but side-by-side with the ruined and used-up bodies of human beings.

The liberties that we cherished in our documents and in our bold words grew, unsound and untested, around the canker of peoples shackled and peoples thrown violently from their ancestral territories. In the 1860s we conducted a Civil War in an effort to purge this sickness, hoping to buy in fresh blood some redemption from the old stain. But the surgery was crude and primitive and from the damaged body of our nation grew new deformities, new diseases.

The last 150 years of American history have been a study in secret white rage, savage violence and race-hatred.

After the Civil War, America’s whites launched a war of oppression and slaughter against the Native tribes of the West, a siege that lasted at least until 1907, when the US Cavalry was still skirmishing with Navajo tribesmen.

We erected a government-sanctioned system of white privilege and opportunity known broadly as “Jim Crow,” that insured well into the 1960s that blacks would be denied the freedoms guaranteed under our Constitution.

Decade by decade, whites showered insults and brutalities on African Americans; and at every turn we pretended, in our sickly shame, that blacks were themselves at fault for our own shattering falseness. We allowed a system of terror and oppression to exist across the United States — not just in the South — that decorated our land with the “strange fruit” of black men and boys dangling dead from trees. They were tortured and murdered not by thugs and hooligans, but by the upstanding citizens and officers of the peace of our sacred small towns.

While the rest of America grew and prospered and saw its seed corn grow up into great cities and suburbs and 21st century industries, blacks were again and again denied the ability to buy homes in our best, safest neighborhoods.

They were deliberately excluded from the businesses and the clubs and the schools and the churches — often, from whole communities — where our growing bounty was nurtured and shared.

Meanwhile, along that terrible journey, whites kept telling themselves pernicious lies about blacks. Blacks were to blame for their own poverty. Blacks were to blame for their lack of wealth, for their lack of opportunity. We invented and nurtured the comfortable fiction that black men are criminals and drug addicts and “thugs.” We used them as bugbears in our political campaigns, as symbols of disorder and chaos.

In the 1970s and 1980s, when we saw black communities foundering in a wave of poverty, joblessness, addiction and lack of education we responded, not with a Marshall Plan to help raise up their communities, but instead we created a vast and growing network of militarized police, and public and private prisons. We reinvented our criminal justice system so that it began, almost overnight, to funnel tens of millions of black men into jail cells.

Whites committing the same crimes were, in the vast majority of cases, sent for drug rehabilitation, for job retraining, parole, or for military service. Blacks, by contrast, were made into an army of felons, and permanently denied many of the basic dignities and rights of citizenship.

Along the way, we watched as the growing army of overwhelmingly white police failed to perform the basic and fundamental public service of making black communities safe. Instead, blacks found themselves “stopped and frisked” without cause. They found themselves being watched and stopped and harassed with a frequency that no white American would tolerate. They found their young men, even those who were unarmed, guilty of no crime or only minor infractions, lying dead in police shootings.

It is time and long past time for a great American scribe to take up the challenge of examining the strange souls of white folks who live in this great nation and who bear the great burden of this racial legacy. It is time to demand a new chapter in our history, one of remembrance, one of accountability, one of courage, and one of penance.

W.E.B. Du Bois talked in his book about the halls of Jubilee, with its bricks “red with the blood and dust of toil.” That is undeniably the foundation of our great America. We are a remarkable nation, but we sank a great part of our taproot into shame and villainy and hatred.

But it is in our spirit, as white Americans and black Americans and Americans generally, to be courageous and to speak plain truths and to pay our debts. The rage in Ferguson, Missouri, gives us one more chance to begin writing this new chapter, one more day on which to wake up and rise up and make ourselves accountable to the vision and idealism and, yes, the higher moral burden laid upon us by citizenship in our Republic.

This great book about the souls of white folks, laying out the steps required for redemption, has yet to be written. In the meantime, there is something that we can all do to begin the healing. Tonight when you see African American men raging on your television screen, don’t waste your time thinking about what those images say about blackness. If you are a white man or woman, that is not your burden, not now, not at this juncture in our history.

Your burden–and it is a grave burden–is to think about what those images say about you and us and whiteness and the long, terrible road that brought us all to Ferguson, Missouri.

76 Comments on “The Souls of White Folk”