Subscribe
iTunesSpotifyGoogle PlayRSS
by Brian Mann on September 17th, 2014
The biggest political question this November is whether Republicans will win control of the US Senate.  It seems like a no-brainer.  Democrats are deeply unpopular right now, thanks in part to President Barack Obama’s lackluster second term, and the unpopularity of Congress, for which voters give much of the blame to Democratic Senate majority leader Harry Reid. 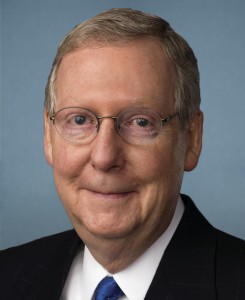 He’ll get close but will he get his majority? Photo: US Senate

Democrats are also defending a lot of seats in states that have become fairly bright red, places like Arkansas and Louisiana.  Call it good old fashioned horse race journalism, but I’m going to go out on an early limb and predict — against the grain of conventional wisdom — that the Senate will remain in the control of Democrats.  Here’s why.

A good GOP year but maybe not a great one…

First, the Republicans just plain have a huge amount of ground to make up.  Democrats and their Independent allies in the Senate hold a whopping 55 seats.  The GOP, in order to gain a clear majority, needs to capture six US Senate seats.  That’s a tall order even in a wave year.

Republicans are going to have a great November.  They’re almost sure to gain Democratic seats in Montana, South Dakota and West Virginia.  But they still have to find three more pick-ups, without losing any seats of their own.

Second, while the national mood on Democrats is sour and that affects state-by-state contests to some degree, Senate races are not in the final equation a referendum

.  Mr. Obama isn’t on the ballot.  Neither are generic Republicans and Democrats.  Which means that when voters go to the polls, they have to choose between real candidates, real people.

And the truth is that in many states where Senate control will be decided, Democrats are fielding strong, well-funded candidates, some of them incumbents.  Kay Hagan in North Carolina and Mark Begich in Alaska are both running capable, hard-driving re-election bids and both have a real shot at squeaking through.  Begich is outspending his rival on campaign ads.  Hagan is polling consistently ahead of her Republican challenger.

Even in Louisiana, where one would think a GOP pick-up would be a cake walk, Democratic incumbent Mary Landrieu has kept the race competitive, thanks in part to a third-party bid by a Tea Party candidate.  A GOP win there is by no means assured.

The third advantage for Democrats is that parts of the US continue to trend purple, or even blue, despite the zeitgeist of the moment, thanks in part to the growth of Hispanic voting power, increasing urbanization, as well as strong support for Dems among women and younger voters.  Those patterns are helping Hagan, but they’re also boosting the hopes of Mark Udall, the Colorado Democrat seeking another term.


In Iowa, a rural-heavy state which has trended Democratic — voting for Democrats in four out of the the last five presidential elections — Democrat Bruce Braley is running consistently (if narrowly) ahead of Republican Joni Ernst.  (A recent poll shows Ernst surging past Braley…)

The final advantage for Democrats is that they only need to win five of the big battleground Senate races to hold their majority.  That’s because in a tie Vice President Joe Biden is empowered to cast deciding votes.  The GOP, meanwhile, has to win six contests to gain a clear majority.  In the end, that one-seat structural advantage could make all the difference.

So here’s my mid-September scorecard

In the key battleground states, Democra

ts will win Alaska, Colorado, Iowa, Michigan and North Carolina, giving them the 50 seats they need to hold control.  They also have two longer-shot win possibilities in Arkansas — where incumbent Democrat Mark Pryor is still within a few points of his GOP rival — and Kansas, where incumbent Republican Senator Pat Roberts faces a surprisingly stiff challenge from Independent candidate Greg Orman.  If Orman wins, he’s expected to caucus with the Democrats.

Meanwhile, I see Louisiana as a complete toss-up.

Republicans can count on winning Georgia and Kentucky.  But to give Mitch McConnell the gavel, they need to find more big wins against solid incumbent candidates.  In the case of Roberts they’ll have to overcome his significant missteps early in the campaign to hold that traditionally Republican seat.

Granted, all this plays out against a very tough season for Democrats.  The president’s party traditionally gets whalloped in elections held in his sixth term and Mr. Obama is deeply unpopular in many of the states where control of the Senate will be decided.

It’s also only fair to point out that my predictions tend to be wildly and hopelessly wrong.  With those caveats, I’m predicting that it’s going to be a squeaker, but on a state-by-state basis Democrats still have the edge.

26 Comments on “Who will control the US Senate after November? A prediction”