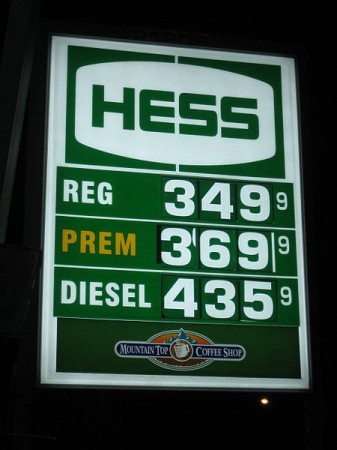 Gas prices in 2008 at Hess Station in Wilmington, MA. The price per gallon of regular gas was $2.35 on January 1st of this year. Image by Rene Schwiezke, Creative Commons

The Canadian Press recently selected slumping oil prices as 2014’s business story of the year. And that will be a topic of massive impact for 2015 as well.

Most are feeling feel like winners right now each time they gas up at the pump. The outlook is also favorable for those who heat their homes with fuel oil or propane.

If you sort by state, at least one analyst put that score this way:

Stephen Brown, an economist at the University of Nevada, Las Vegas, offers a simple map breaking things down. On the whole, cheap oil is expected to boost economic activity in 42 states (in green and yellow) while hurting it in the remaining 8 (in red)

This BBC assessment, breaking impact down by country, counts the shift as a “win” for the U.S., a mixed blessing for Europe and Asia and decidedly bad news for Russia and Venezuela. Depending on what one focuses on, Canada gets hurt and helped. It could hurt Saudi Arabia too, but they may have enough reserves (in oil and cash) to just wait it out.

If you really want to dig into this topic, I recommend this very insightful interview of oil expert Terry Lynn Karl by Andrew Nikiforuk about what so-called “petro-states” are and what they should worry about. Sobering observations.

Green energy technologies such as solar and wind had been banking on sharp increases in fossil fuel prices to make them increasingly competitive and help to attract the huge amount of investment required to build renewable power plants. But that “economic case” is now in danger of being lost, with the environmental argument seen by many as being insufficient to drive through high levels of green energy investment.

I would postulate that over-reliance on any single source of energy is inherently risky and that oil prices will go up again, sooner or later.

After that I’m at a loss. The market has its own brilliant (if brutal) efficiency that will assert itself time and time again. However, by and large, market forces care not a wit for the long-term health of the planet. It’s a complicated picture that’s not necessarily subject to any single nation’s control.

Do you see this as a good thing, a bad thing, or just one of those things, that is what it is?

2 Comments on “Winners and losers as oil prices slump”