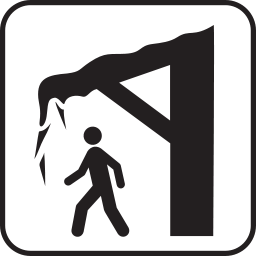 A pictogram used by the United States National Park Service.

Finally! We’re now thawing out from under the icy grip of an exceptionally cold winter. Which leads to other hazards worth noting: potholes and falling ice.

Surprisingly, the Ottawa Sun reports that public works officials here are hoping this will be a better-than-usual year for potholes. Why? Because frequent freeze-thaw cycles are what make more and bigger craters in the roads. And things just sort of stayed frozen solid across February. Sure, it’s early days still. But – so far at least – potholes seem to be down this spring.

Meanwhile, besides looking down at the road ahead, it’s definitely time to have a care for what may be melting loose overhead. Here’s an unfortunate incident that took place Tuesday, as reported in this morning’s Ottawa Citizen:

Paramedics were called to a stretch of Cooper Street between Bank and Lyon streets just after 5 p.m. after a man was struck on the head by a 100-kilogram chunk of ice as he walked along the sidewalk.

The 56-year-old had suffered a deep cut to the back of his head, a broken collar bone and a possible concussion. He remained conscious, but paramedics took him to hospital in what they described as serious but stable condition.

For the non-metric reader, that’s something in the range of a 220lb ice bomb. Not fun and not funny.

Property can be at risk too, as with these cars damaged by falling ice in Boston.

The subject prompted a bit of math, physics and humor from “York Underwood”, a Canadian who moved to Iceland and is blogging about the transition.

“Listen, Duck, and Run: How to Avoid Falling Ice and Snow in Reykjavík” works through a list of variables to to calculate the amount of “warning” one might hope for when those ice chunks start descending.

Now the average median reaction time of a human is 0.215 seconds. This suggests you can avoid being hit by ice and snow! Yes!

For the average maximum we add the extra two metres of height. Remember we don’t factor in the horizontal component because horizontal and vertical components are independent. Also, we are assuming a frictionless roof.

That York Underwood post goes on to discuss the ethics of using your sidewalk companion as a human shield:

However, life is hard for tall people. We are not placed on Earth simply to grab things from shelves and canopy over our short friends like a missile shield. If you are tall, and walking with a short but not necessary loved companion, keep your shoe lace closest to the buildings undone. When you hear the sound of ice and snow sliding, simply tie your shoe. You do not control the elements. This is not your fault.

But, seriously, keep an eye out and keep your ears open. Think about what may be in harm’s way and consider moving it/yourself elsewhere. Don’t spend any more time than necessary beneath what’s coming off roofs right now.