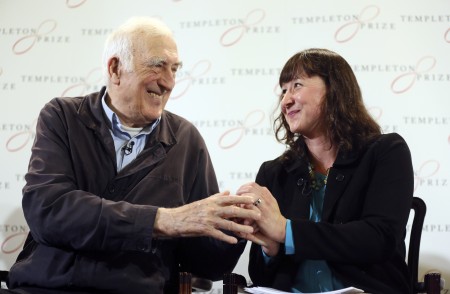 Most of us have heard of things like the Nobel Prize, or perhaps the MacArthur Foundation Fellows, the so-called genius awards.

A less famous award (that should perhaps be better-known) is the Templeton Prize.

Here’s what it tries to celebrate, according to the foundation’s website:

The Templeton Prize honors a living person who has made an exceptional contribution to affirming life’s spiritual dimension, whether through insight, discovery, or practical works. Established in 1972 by the late Sir John Templeton, the Prize aims, in his words, to identify “entrepreneurs of the spirit”—outstanding individuals who have devoted their talents to expanding our vision of human purpose and ultimate reality. The Prize celebrates no particular faith tradition or notion of God, but rather the quest for progress in humanity’s efforts to comprehend the many and diverse manifestations of the Divine.

This was all the brainchild of Sir John Templeton (1912-2008) who wanted to highlight breakthroughs in something one might label “spiritual progress”. Again, from the Templeton Foundation:

Its monetary value, currently £1,100,000, always exceeds that of the Nobel Prizes, which was Templeton’s way of underscoring his belief that advances in the spiritual domain are no less important than those in other areas of human endeavor.

The first winner was Mother Teresa in 1972. This year’s winner – of a prize worth $2.1 million in Canadian dollars – is an 86-year-old Canadian, Jean Vanier.

The son of a former Governor General, Jean Vanier spent most of his life in the service of humanity. While seeking the best way to do that in France in the 1960s, Vanier established a household that included two men with mental handicaps, who had been locked in a dismal and violent institution following the death of their parents. Vanier created an alternative based on respect and harmony.

That small start – creating lives of inclusion and love for the mentally handicapped – evolved into L’Arche (The Ark). Today there are 147 L’Arche communities supporting persons with intellectual disabilities in 35 countries.

In remarks after the prize was announced, Vanier said the world is at a crisis point. He says more energy must be directed toward teaching love. As summarized by the Toronto Star:

“Either we will move together towards a deeper unity of all people, in a spirit of openness, fraternity and mutual respect, or the divisions that exist will grow into terrible forces of fear and hate, encouraging wars, terrorism and even the use of atomic weapons, each of which is a form of suicide for humanity.”

Vanier called for a transformation from “the culture of winning so common in our societies today.”

“This culture of winning means that few people win and many lose,” he said. “Those who cannot win are shoved aside, and very quickly society becomes divided … A terrible rift is created.”

He said that “before being Christians or Jews or Muslims, before being Americans or Russians or Africans, before being generals or priests, rabbis or imams, before having visible or invisible disabilities, we are all human beings with hearts capable of loving.”

Speaking with CBC’s As It Happens, Vanier said that living in L’Arche communities has taught him what it means to be human.

Vanier was featured in this On Being with Krista Tippett program (Aug.22, 2013):

Considered by some to be a living saint, Jean Vanier created L’Arche, a model of community for people with mental disabilities that celebrates power in smallness and light in the darkness of human existence. The French Canadian philosopher and Catholic social innovator speaks about his understanding of humanity and God that has been shaped by Aristotle, Mother Teresa, and people who would once have been locked away from society.

At the risk of editorializing, it seems clear to me the qualities Vanier champions would serve anyone well, whatever their mental capacity.