Subscribe
iTunesSpotifyGoogle PlayRSS
by David Sommerstein on May 8th, 2015 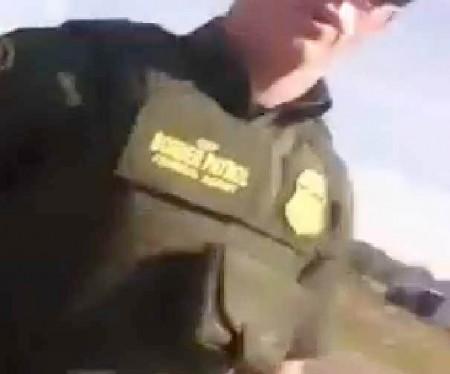 A disturbing incident at a U.S. Border Patrol roadside checkpoint near Ogdensburg that was captured on video is going viral via Facebook.

Jess Cooke, an Ogdensburg native and criminal justice student at SUNY Canton, distributed a video of herself being tackled and tased for more than a minute by Border Patrol officers following an exchange that led to a confrontation.

In the video, Cooke appears to have been pulled over for secondary inspection at the checkpoint. Cooke asks two officers repeatedly why she is being detained, to which the officers initially give no direct answer. “I’m not the only one who observed your nervous behavior,” says the female agent. After the male agent instructs Cooke to walk back to her car, and she refuses, the male agent tackles Cooke while the female agent applies a taser to Cooke’s back, according to Cooke’s description on the Facebook post:

They held me against my will until the K-9 Unit come to check out my car! I tryed to see what was going on after i had to pull over and wait. A MAN pushed me and then threw me to the ground while a WOMAN stood there and tazed me until I stopped screaming!! Then they cuffed and arrested me and put me in the Border Patrol car while they illegally opened my whole car and trunk and searched it!!! ILLEGALLY!!! They had no warrant and no reason to search it!!

In the video, Cooke is heard screaming for more than a minute for the tasing to stop.

According to Cooke, following a search Border Patrol officers found nothing of concern in her car or trunk.

Shelby Benson-Fuller, a spokesman for U.S. Border Patrol Swanton sector, says a public response to the incident is being prepared at this hour.

Roadside checkpoints have become commonplace on roads leading away from the U.S.-Canada border throughout the North Country. U.S. Border Patrol says they are used to find undocumented immigrants, drugs, and potential terrorists.

We’ll have updates to this story as they become available.