Subscribe
iTunesSpotifyGoogle PlayRSS
by Brian Mann on May 23rd, 2015 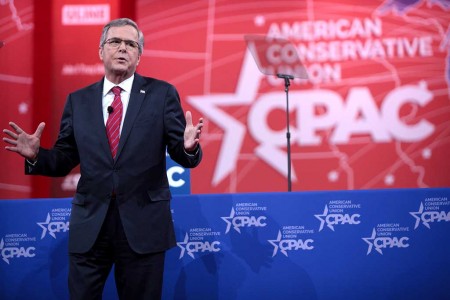 Poor Jeb Bush. Really. You have to feel a little sorry for him. More than half a decade after his older brother stepped away from the White House, leaving the US mired in two poorly conceived and disastrously executed wars, Jeb’s fledgling candidacy has suddenly, somehow, triggered the war-reckoning that many in our nation have hungered for since American boots first hit the ground overseas in October of 2001.

There’s no doubt that Bush’s clumsy attempt to grapple with his family’s history and the aftermath of those wars contributed to his personal political crisis. In one sense, the wounds inflicted on his candidacy over the last two weeks are self-inflicted. But it’s also true that no one could have guessed that after years of silence and avoidance and muddle, the media and the public would suddenly choose this moment to demand straight talk about went wrong

Much of the long-overdo bluntness, in fact, has come from a surprising quarter, from pundits on the right who have long resisted any efforts to think through the Afghanistan-Iraq fiasco. Fox News and conservative talk radio hosts have worked for more than a decade to bully us away from factual treatments about how the Bush era White House hyped pre-war intelligence, launching not one but two invasions without proper equipment or training and without any plausible exit strategy.

The devastating impact of the Iraq War in particular on the politics of the Near East have been largely ignored by conservatives as they struggled to lay full blame for that region’s woes at the feet of President Barack Obama. Any effort to look back, any effort to parse our recent, devastating military misadventures has been spun as an effort to excuse or whitewash the current administration’s own foreign policy failures.

To an enormous measure that effort at collective amnesia worked. Most Fox News viewers, in particular, see the deaths of a handful of American embassy workers in Benghazi, Libya, as the fulcrum of a national crisis, a matter worthy of endless congressional investigations and conspiracy theories. But any detailed accounting of what went wrong in Afghanistan and Iraq has been assiduously and aggressively avoided.

Even when former Vice President Dick Cheney asserted repeatedly that no mistakes were made and nothing should have been done differently, the media in general and the conservative media in particular nodded cheerfully and pivoted back to chattering about Mr. Obama’s “naivety” and his suspect motives when dealing with Muslim extremists.

Jeb Bush must have been expecting much the same when he answered Megyn Kelly’s question on Fox News, suggesting glibly that his loyalty to his brother trumped any adult assessment of how our foreign policy went so horribly wrong. He then spent a full week backpedaling and trying to sort out his message, arguing in part that any attempt to think clearly about Afghanistan and Iraq would be a disservice to the troops who fought there.

“Of course, given the power of looking back and having that, of course anybody would have made different decisions,” he finally conceded, in an interview with CNN. “There’s no denying that. But to delve into that and not focus on the future is, I think, where I need to draw the line.”

Other Republicans tried to get back on-message. That message being, of course, that Afghanistan and Iraq were credibly reasoned and competent uses of American power that were going just fine, thank you very much, before Barack Obama mucked them up. Speaking with Chris Wallace on Fox News, Senator Marco Rubio, the Republican presidential candidate from Florida, said bluntly that invading Iraq “was not a mistake.”

Pressed to address our present-day knowledge that the intelligence justifying the war was wrong, Rubio answered this way: “Well, based on what we know now, I would not have thought Manny Pacquiao was going to beat [Floyd Mayweather] in that fight a few weeks ago,” he said. “The question was whether it was a mistake, and my answer is, it’s not a mistake. I still say it was not a mistake because the president was presented with intelligence that said Iraq had weapons of mass destruction, it was governed by a man who had committed atrocities in the past with weapons of mass destruction.”

But even other conservatives simply were no longer buying it. Former Republican congressman Joe Scarborough, a host on MSNBC who is often talked about as a possible presidential candidate, described the Iraq War as “a horrible idea, as bad an idea as sticking your face in a blender.” Speaking on her radio show, conservative talker Laura Ingraham said, “You can’t still think that going into Iraq, now, as a sane human being, was the right thing to do. If you do, there has to be something wrong with you.”

Kentucky senator and presidential candidate Rand Paul went a step further, suggesting that voters should, in fact, use the candidates’ views of the Iraq War as a yardstick to choose who they want to occupy the White House next. “If you want another Iraq War, you know who they can vote for. If they want somebody who will only go to war when it’s the last resort, when we have to defend America or American interests, there are going to be some other alternatives.”

It’s worth pointing out that this rhetoric, from the likes of Scarborough, Ingraham and Senator Paul, is the kind of thing we used to hear only on street corners from anti-war protesters. The mainstream media is still largely terrified of reporting a clear-eyed and aggressively skeptical assessment about what went wrong after 9/11, what the consequences were, and who is responsible.

But here’s an irony. In the final equation, the politicians casting the darkest shadow over our Iraq misadventure and raising the most pressing questions may be Jeb Bush and Marco Rubio themselves. In suggesting that any grown-up conversation about that episode in our history might disrespect service-members who fought and died in Afghanistan and Iraq, they seem to be tacitly supporting the idea that it was a deadly and costly disaster, one that cost thousands of American lives and more than a trillion dollars in misspent tax money, while also destabilizing an already volatile region and discrediting US power overseas.

Here’s the thing, Mr. Bush. If it’s so ugly that we can’t talk about it without dishonoring our most honorable citizen soldiers, then you must think it’s very ugly indeed.