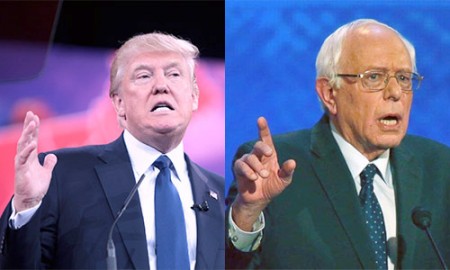 The best polling and election data we have available right now — along with a common sense review of the electoral map for November — all suggest that America’s political system is once again on track to elect a fairly moderate, mainstream, middle-of-the-road politician to the White House. Our next president is very likely to be Democrat Hillary Rodham Clinton.

But it is interesting, and perhaps informative, to consider the scenarios where in this remarkable election year a very different outcome could result. It’s not likely, but we could see Donald Trump or Bernie Sanders taking the oath of office next January. Here are three ways that could happen. The unifying theme of these “what-if” scenarios is  they all require a big, surprising event to flip the race’s narrative.

Let’s start with Hillary Rodham Clinton. This race is, as of late March, hers to lose. She holds a commanding lead in the Democratic primary, polls show her with a clear path to the nomination, and she looks set to face a fractured, volatile Republican Party. For Team Clinton, it’s all good.

So the first thing that Sanders and Trump need is for Clinton to stumble badly. It appears highly unlikely that Clinton will be indicted by Federal prosecutors for her handling of a private email system while she was Secretary of State, but that kind of event would represent a nearly fatal blow to her candidacy.

It’s also possible that Clinton or her sometimes provocative husband, former President Bill Clinton, could stumble into a truly race-resetting gaffe. This, too, appears unlikely. One of Clinton’s faults as a politician is her plodding caution. But this trait makes it harder for other candidates to wait patiently hoping for a big break.

If something dramatic does happen, timing will be everything. A blow-up that occurs in the Clinton camp before the Democratic convention, would position Sanders to step in. If it happened after the convention, when Clinton is the nominee, Trump will benefit.

Polling data and the long history of American general elections both suggest that Donald Trump could be a truly disastrous general election candidate. He has all the red flags of a George Wallace or a Barry Goldwater, with none of their ideological clarity or heft.

The latest survey from the New York Times found that 75 percent of independent voters now have a negative view of the Republican Party. Conservative leaders are all but promising to mount an independent Republican challenger to run against Trump in the general election.

That all adds up to a formula for electoral disaster. Some pundits say the debacle could be so big that the House and Senate could be in play.

So given those headwinds, how does Trump prevail? Events this week in Belgium show us one horrific but plausible scenario. If between now and November a medium- to large-scale terror attack (or, worse yet, multiple terror attacks) were to occur in the United States, Trump’s strongman persona could shift in the voters’ minds.

Currently, his “I have a good brain” brand of braggadocio is the stuff of Saturday Night Live lampooning. But if Americans find themselves truly frightened and enraged in the months and weeks leading up to the election, this could change fast. Trump’s factually inaccurate anti-Muslim rhetoric could begin to resonate well beyond the roughly 40 percent of the GOP base where he’s now winning votes.

This is also an election where gender is certain to play a subtle but significant role. If America views itself as “under attack” we could see more voters overlooking Trump’s baggage and his lack of national security or foreign policy experience, simply because he talks tough and he’s a man.

Talking about Bernie Sanders’ big what-if scenario takes a bit more explaining. The Vermont Senator has run a brilliant, surprising, and fatally flawed campaign. Brilliant because he quickly projected a series of ideas and a political persona to a national audience, capturing the imagination of millions of mostly white liberals. Fatally flawed because he failed to connect with the broader coalition of voters who, taken together, decide Democratic primaries.

Without a big and timely assist from Clinton (see Scenario One above), Sanders appears set to join the long line of close-but-no-cigar liberals (Paul Tsongas, Jerry Brown, Mario Cuomo…) who make up a fascinating footnote of Democratic Party history. But I think there’s actually a plausible scenario where Sanders could re-emerge in the general election, running as an independent.

We already know Sanders never really wanted to run as a Democrat and has always viewed the party with suspicion. “I am not a Democrat,” he famously told the Progressive magazine. He said, “The Democratic Party does not represent, and has not for many years, the interests of my constituency, which is primarily working families, middle-class people and low-income people.”

Earlier this month, Politico reported Sanders had no interest in challenging Clinton in 2016. He preferred a third-party bid, but his advisers talked him out of it. During an appearance this month on MSNBC, Sanders acknowledged that he was a Democrat as a matter of convenience and calculation. “In terms of media coverage, you have to run within the Democratic party,” he said.

To his credit, Sanders skillfully used the Democratic primary to leverage media attention and national exposure, catapulting himself from a role as a largely unknown U.S. Senator from a small, rural state in the Northeast to a liberal leader of national prominence.

So what does he do with that influence if he loses the nomination to Clinton?

At first blush, it seems like he has no choice but to step back and accept defeat. That’s what he has promised to do. A third-party run for Sanders would almost certainly be disastrous. Even if he partnered with yet another party of convenience (the Greens?) it would be challenging for the Vermont Senator to petition his way onto the ballot in all fifty states. He would, as he has acknowledged, almost certainly split the center-left vote in ways that could usher in a Trump victory.

But a fourth-party bid might be more viable. There is widespread talk among high-level conservative operatives who say that if Trump wins the nomination on the GOP side, they will field an “Independent Republican” candidate to be their standard bearer.  Earlier this month, the New York Times reported a coalition of “. . . leading conservatives are prepared to field an independent candidate in the general election, to defend Republican principles and offer traditional conservatives an alternative to Mr. Trump’s hard-edged populism.”

If this happens, if America heads into next fall facing a European-style scrum with multiple candidates on the ballot splintering the general election vote, Sanders may find it tempting to join the fray with his highly mobilized core of passionate voters.

Sanders in a four-way race could be…interesting

In a four-way race, he would have the money, the volunteer base, and the momentum to be a major player. In a fractured fight, He could count on being highly competitive in a number of “blue” states (Michigan!) and he could ignore parts of the south where Republicans will almost certainly prevail anyway.

Granted, Clinton’s wins tended to come in bigger, more populous states.  But if Sanders continue to fare well into April and June, perhaps winning California and tying New York state, the logic for a fourth-party bid could grow.  This kind of push into the fall and the general election would still be hugely risky. If no candidate gets to 270 electoral college votes, the presidency is decided by the U.S. House, which is dominated by very conservative tea party Republicans.

But it’s not a suicide mission. Meanwhile, Sanders is 74 years old. This is his one shot. And he clearly believes that he is better positioned to lead the revolution his followers are calling for.

All of these scenarios are hypotheticals. They all put Sanders and Trump in a position powerful men hate to be in; that is, needing a lucky break, needing big events to curve history in their direction, or needing the race’s front-runner Hillary Clinton to fumble badly.  But 2016 is the kind of election year where it seems like just about anything can happen.

11 Comments on “What if? How Trump or Sanders could actually win the White House”